The craze for retro-vibing cars is gradually increasing. But there are only a few that still possesses the true classic essence of yesteryears. One very prominent one is the Morgan Three Wheeler which got revived as the Super3 for 2022 with a Ford three-cylinder motor and more "modern" styling. Then there are cars like the Alpine A110 and the Acura Integra that strive on nostalgia but are proper modern machines.

Well, the Wiesmann MF5 Roadster hits the right chord on both the retro and modern strings. The Wiesmann brand name might be alien to most of you. It is a German automaker known for making artistic hand-built coupes and convertibles and has a gecko for its emblem. The automaker has been silent for quite some time now and was even planning to bring about a cool car in 2020 with the Project Gecko, but that didn't take off. So, the MF5 Roadster is its last production vehicle to roll out, and it looks downright gorgeous.

While it looks like it has been teleported from the 80s, this classic roadster is a proper modern machine underneath, packing a BMW M5-derived V10 motor and some serious wizardry to make it stick like a gecko on the tarmac. True to its manufacturing heritage, the car is hand-built and was a limited production model. So, seeing one on sale is as rare as seeing a unicorn. But currently, there is one MF5 coupe for sale on classicdriver.com for a staggering $307,722. Who says that retro is out of fashion?!

This Retro-Vibing Roadster Has A BMW Heart

This retro German roadster packs the same V10 motor from the E60 BMW M5. It churns out a maximum of 507 hp and 383.5 lb-ft of torque. These figures get unlocked only if you slide this Gecko into "Sport" mode (Wiesmann's iteration of M performance Setting). We don't have to doubt this engine's capabilities as it is one of the sweetest sounding high-revving units out there.

In its standard mode, this roadster pumps out 400 hp. While the engine is front-mounted, it is low and behind the front axle, which sort of makes it a mid-engined layout just like that of the Jaguar F-Type and the Ferrari Portofino. It has an RWD layout, and a seven-speed sequential manual gearbox takes care of flight duties. In its prime, the MF5 Roadster does 0-62 mph in 3.9 seconds and has a top speed of 193 mph.

Related: 10 Affordable German Classic Cars Every Gearhead Should Own

This Gecko For The Tarmac Has Impressive Power-To-Weight Ratio

The performance is mental for sure, but what's even wilder is the fact that this retro roadster weighs in at just 3,075 pounds, that's nearly equal to that of the Toyota Prius which weighs 3,040 pounds! These numbers provide the Wiesmann MF5 Roadster with an impressive power-to-weight ratio of 363 bhp/ton. For reference, the iconic Porsche 918 Spyder with the V8 motor is rated at 366 bhp/ton.

Wiesmann was able to be aggressive with its weight due to the clever use of materials and impressive engineering. Despite being all curvy, the aerodynamic packing is quite compelling with a drag-reducing stance. It also gets a retracting rear spoiler. The handling characteristics are impressive for a car that looks this classic. The driving dynamics is sort of urgent giving it a hooliganisitc appeal.

We are not making this up because why on earth would Wiesmann pack massive 374 mm front and 370 mm rear carbon-composite brakes on this lovely roadster! The suspension is on the stiffer side and the steering is highly responsive, a bit too responsive in the corners though.

The MF5 Roadster Is Created In The Image Of Its Ancestors

Wiesmann is an automaker that is known for its hand-made magic. And they have carried down that essence over the years right up to its last production vehicle - the MF5 Roadster. Its distinctive scooped-up design dates back to the MF 30, the first Wiesmann model ever built. Its love relationship with BMW started right from there.

The MF5 Roadster also gets similarly round headlamps and the same front grille that looks like the cousin found on that of a Bugatti Veyron. It gets 19-inch wheels that look modern but goes quite well with the classic design. And top marks for that cool Gecko logo, we don't think there is another cooler logo than on a car! And despite having the cliché classic car formula, there is nothing out there that looks like a Wiesmann. So, you are guaranteed to tell this German apart with ease. 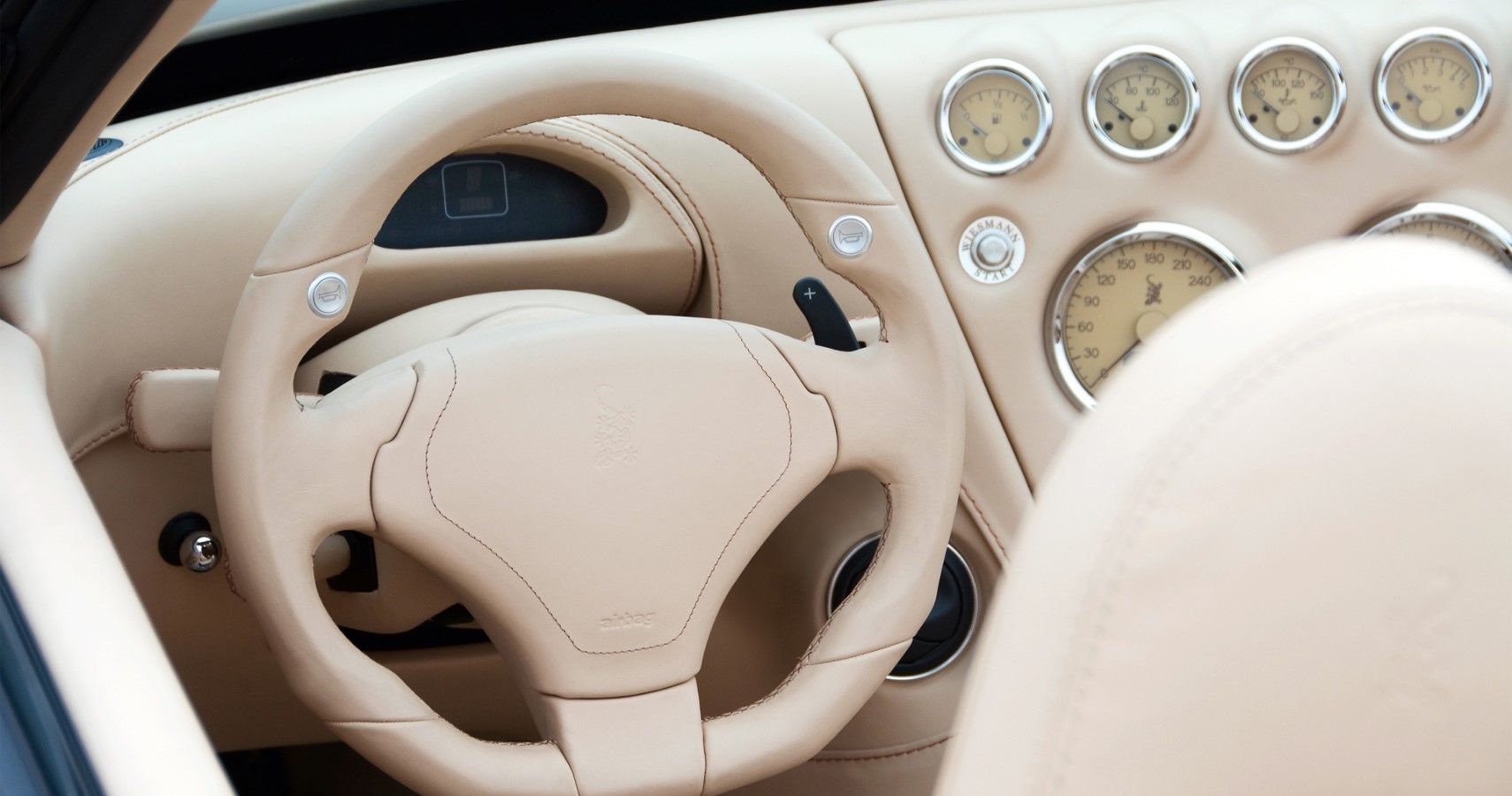 Staying true to its classic vibe, the MF5 Roadster's cabin is completely hand-built. The bucket seats don't go quite well with the classic appeal, but with the level of driving performance this Wiesmann offers, you ought to have all the support!

The dashboard is layered with chrome dials and gets a hand-stitched steering wheel. It also gets an all-digital LED instrument cluster that is neatly tucked away behind the steering wheel. The roof function is manual which goes along with the whole "classic" feel.

Only 55 Units Of The Wiesmann MF5 Roadsters Were Ever Made

The Wiesmann MF5 Roadster came out in 2009, and the total production number was limited to just 55 units. This doesn't come as a shocker since these cars are painstakingly hand-built and, Wiesmann is also a small company with limited production capabilities. Due to its exclusivity, this impressively packaged roadster rarely comes up for sale. But when it does, it goes out with big bucks!

Tijo is an engineer, mechanic, gamer, and an avid content creator. He is a grease-monkey who loves tinkering with automobiles every now and then, when not busy penning down his passion for them. He has always had a soft spot for JDM and is keen on diving deep in for anything that involves wheels and engines.

This Ford Mustang Terminator Cobra Was The Hellcat Of Its Era