Walking through the headquarters of West Coast Customs, one cannot help but be overwhelmed by the number of incredible creations this establishment has bestowed upon the car-loving public. From their flame-detailed trucks of the 90s to a whole roster of luxury and sports cars for NBA superstar Shaquille O'Neal, this group of incredibly talented visionaries, headed by CEO Ryan Friedlinghaus, have blessed the streets of LA County for decades.

What started as a passion project in his then Las Vegas home garage has led Ryan Friedlinghaus to the forefront of the car customization industry. This corporation has spanned across decades with name changes, locations, and even TV shows coming and going. Finally settling into their newest headquarters in Burbank, California, the team has begun working on many newer projects that are still sworn to high secrecy. As Ryan says in the intro of their critically acclaimed TV show West Coast Customs, they love to look to the future without forgetting the past; so let's look back at some of the best builds West Coast Customs has produced in recent years.

This beauty started its life as a yellow 1977 Porsche 911; however, much like the popular friend in a high school film, West Coast Customs gave it the makeover of a lifetime. The owner brought it in to the shop saying he wanted something more reminiscent of a classic Porsche but with a West Coast Customs twist. The car was completely disassembled, stripped, and built back up from scratch.

While the outside was redesigned with a classic blue on white Porsche color scheme, the inside was outfitted with limited edition Blue Dixxon flannel and blue leather detailing. This beast comes packed with a reimagined RSR Engine, a twin-plug 3.6-liter engine, and an aggressive GT3 exhaust system.

Though the team was a bit hesitant to take apart this million-dollar grand tourer at first, they managed to give it the classic West Coast Customs treatment. The Nardo gray paint job, satin carbon fiber body, and matching blue calipers make this hypercar a sight for sore and well-rested eyes everywhere. While the exterior is incredibly impressive, the customization didn't stop there.

The interior designers at WCC decked the vehicle out with hand-sown Bugatti Blue seats and a matching European stitched steering wheel cover. Thanks to West Coast Customs, this specific Linea Vivre is somehow more limited and exclusive than its already limited edition title would indicate.Related Here's How Bugatti Will Take Care Of America's Veyrons Even After Standard Warranty Expires

Looking like something straight out of Steve McQueen's collection, the build puts the sic(k) in classic. The team put the Mustang through a complete restoration inside and out. By painting the front lip of the car the same warm amber as the body, the team has outlined one of the most iconic features of the original Mach 1.

With the mate black details to match the fabric convertible top, this car is an intimidating sight for anyone unlucky enough to find themselves beside it at a red light. In addition, the interior designers delivered once more by matching the details on the leather seats with the yellow used throughout the body of the car.Related: Here's What Makes The 1969 Mach 1 A Legendary Ford Mustang

When looking at this classic white-on-red color combination one cannot help but be reminded of Sunday morning milkshakes and drive-ins, even if one belongs to the subset of car enthusiasts who were born too late to have enjoyed those experiences first hand.

No one can deny the beauty of the 64 Impala, W.C.C. did an incredible job with the chrome and gold wheels. In addition, the team has supplied this particular car with an impressive hydraulic suspension system to make any lowrider enthusiast's dreams a reality.

Originally designed in 1968 by then retired Cadillac designer Virgil Exner, the Stutz Black Hawk is as prestigious as classic cars get. Very little is known about this mysterious W.C.C. build, and the suspense adds to its already chic aesthetic. The inside of the car is what puts it over the edge, its bare golden steering wheel and accents pop out against the full black leather diamond-stitched seats and armrests.

This classy gold interior in harmony with the elegant black body and heavily tinted windows is a combination for the ages. Though too classy to be a Batmobile, the car would better suit the completely unrelated Gotham resident, multimillionaire Bruce Wayne.

Though W.C.C. customizations have inspired many manufacturers to integrate details into newer models, their collaboration with Dodge on the Charger made it official. This custom kit for Chargers is only available at a single Dodge dealer in Downtown Los Angeles, where customers can choose to add it to their new vehicles.

The collaboration came as a part of a campaign to make West Coast Customs modifications available to a wider range of fans who might lack the means for a full W.C.C. treatment. With customizations like grill accessories, side skirts, tail diffusers, and custom mirror covers, these additions can "pimp" anyone's ride straight out of the dealer.

Equipped with a classy set of suicide doors, this ivory continental seems fitting for a royal procession. The team at W.C.C. reportedly outfitted the car with its white pearl satin finish, gold details, and a custom suspension rig.

Having originally belonged to many of the "pimps" of the '60s and '70s, Continentals have an unmistakable aesthetic connected to LA and its culture at the time. Created for the hip-hop megastar Post Malone, this car has all the flash and drip that a Hollywood Star's ride should.

This black and yellow masterpiece comes equipped with some of the best aesthetic innovations in automation. The interior of the car was redone with yellow stitches and a suede steering wheel. The team went one step further and added a completely custom glass roof to the entire top of the vehicle, making it open to the outside world without the hassle of a sunroof.

Finally, the team installed a custom sound system that opens directly into the back of both the driver and passenger seats, making anyone feel badass while sitting behind its aforementioned suede steering wheel.Related: 10 Best Car Sound Systems, Ranked 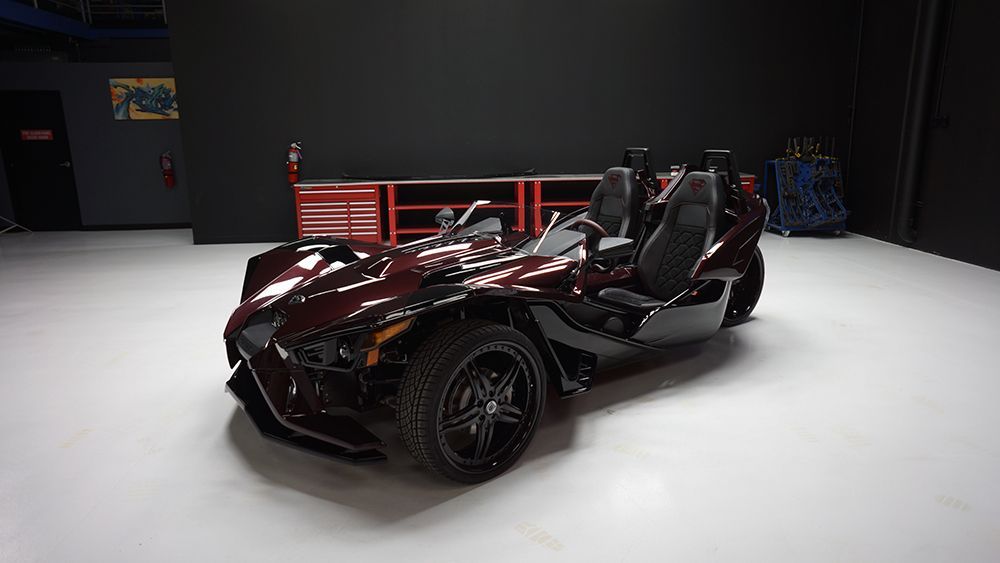 The team had to start this process by extending the chassis by 8 inches to accommodate Shaq Diesel's large frame. The seats were retrofitted burgundy and also extended a few inches. The team utilized custom molding techniques for both the inside and the outside of the vehicles to make the size change seamless.

At Shaq's request, nay, demand, they also integrated the Superman details which Shaq loves having in his W.C.C. builds. After all of these modifications, the guys at W.C.C. had to redo the arrangement of the pedals to accommodate Shaq's whopping size 23 shoes.Related: 9 Cars Shaq Had To Customize To Fit Into (And 8 He Fit Into Just Fine)

One of the most iconic W.C.C. builds, this beautiful modified F150 Raptor can still be found on the front doorstep of the headquarters. The car come equipped with a matching blue theme both inside and out, whopping 22-inch tires, and a custom 4-inch lift courtesy of West Coast Customs.

Much like the wide body charger, many of the innovations that W.C.C. integrated into this truck were later integrated by Ford into newer models of the F150 Raptor.

Gor Babakhanyan is a young writer with an infinite curiosity and love for the automotive industry. Having grown up in a family of car enthusiasts, he has felt a connection to automobiles since childhood. Gor has promised to love and cherish his lime green convertible Mustang to the last mile, until lemon law do them part.

This Road-Legal Porsche 917 Is A 10-Year Recreation Project

This Ford Mustang Terminator Cobra Was The Hellcat Of Its Era

The BMW Concept XM Is The Future EV Of Our Dreams

This Is How Much A Lamborghini 350 GT Costs Today

The Best Features Of The BMW M1

This Is Why We Love The Ferrari F50