Interestingly, the Toyota Century debuted in 1967. Hence, the debut coincided with the 100th birthday of Sakichi Toyoda, founder of the Toyota Industries, and this inspired the marque's name, "Century." The full-size luxury car serves as Toyota's flagship car within Japan. Over the ensuing 55 years, the Century would bear a lot of firsts for Toyota, and largely the Japanese domestic market.

Featuring the first mass-produced V8 engine, in addition to Japan's first V12 after the arrival of the second-generation, the Century is said to be Japan's first, and only remaining, "chauffeur-driven car." With only minor tweaks and updates since it was unveiled over five decades ago, the Century is seen as the epitome of luxury in Japan. A luxury that comes with a very hefty price tag. Join us as we delve into the history of Japan's high-level executive car, the Toyota Century.

Based on the platform of the Toyota Crown (the first Japanese car to feature a V8), the Century (with chassis-code VG20) debuted in the fall of 1967. That was almost two full years after Nissan had introduced its ultra-luxury flagship, the President. Although the Century was not the originator of the full-size luxury market, it surely defined it.

Featuring the first Japanese crafted, full aluminum alloy block, the 3.0-liter 3V engine was an updated version of the Crown's hemispherical-combustion, 2.6-liter V8. Capable of 150 horsepower, and 173 lb-ft of torque through a 3-speed column shifter, the first-generation Century would see numerous engine upgrades over the span of its 30-year run.

Receiving its first update in 1973, the Century, now bearing the VG21 code, not only featured the latest 3.4L V8 engine, dubbed the 4V, but it also adorned the latest and grandest comfort features, to prove to all other businessmen, just how successful you are. With the inclusion of climate-control, updated electromagnetic locks, and front disc brakes, the Century would also see several more engine tweaks before another exterior modification in 1982.

As a result of Japan's bubble economy in the mid-80s, the Century's production numbers doubled thanks to a new crop of affluent customers, itching to spend their newly earned cash. The influx of wealth also meant that customers needed more room. Toyota answered its most-loyal and wealthiest customers' request with the arrival of the Century Limousine in 1989. Over two-feet longer than the sedan version, the limousine set its sights squarely on the Rolls-Royce Silver Spirit, the then world's epitome of a luxury vehicle.

Winter of 1992 ushered in the final makeover of the first-generation Century, now featuring the 4.0-liter 5V engine, it would remain largely untouched as Toyota began its swan song for the 30-year production run. But Toyota had a little trick up its sleeve for the subsequent years as it began to tease the all-new, second-generation Century.

Related: Here's Why Toyota Should Sell The Century In America

The Second-Generation Toyota Century Is Visually Similar To The First 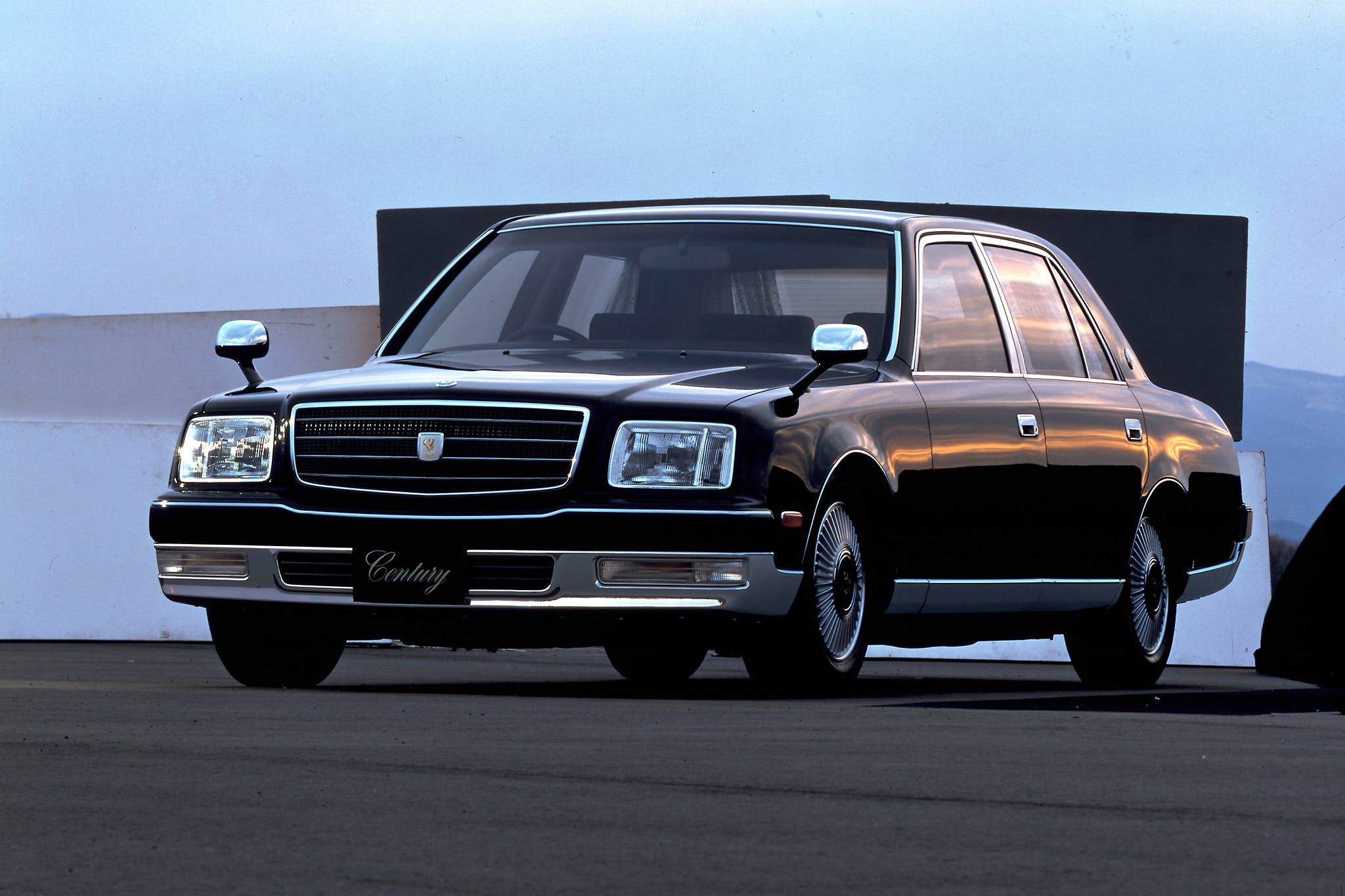 Arriving in April 1997, the second-generation Century was visually similar to the previous generation. It's major difference, however, now sat under the hood of the Japanese automotive gentle-giant.

Powered by the all-new 1GZ-FE, the Century was now the first, and only, front-engine, rear-wheel drive, V12 to be produced within Japan. A feat which it still retains to this very day. As a part of a Gentleman's Agreement, the new Century was advertised as having 276 horsepower in Japan. However, the export model would tell a different story, with an output that is up to 295 horsepower. Furthermore, the Century also produced 340 lb-ft of torque, and it has arguably the best V12 sound of the time.

Nonetheless, we have to realize that Toyota didn't build this car with the driver in mind. It was designed to offer great comfort to the passengers it would be conveying. The car is fitted with massage seats that recline, while the front passenger seat also has a fold-down section, allowing the passengers in the backseat to comfortably extend their legs.

Seen as an escape from the daily grind of the office and workplace, the Century offers certain amenities that the average car wouldn't even think to address. For instance, the pesky sound that door handles make when opened mechanically. For that very reason alone, Toyota elected to build door mechanisms that not only open electronically, but are equipped with a soft-close mechanism that allows the door to pull itself till it's closed, noise-free.

Related: The V12 Toyota Century Is Basically A Living Room On Wheels

The Third-Generation Toyota Century Is An Epitome Of Automotive Luxury

After another 20-year production run, Toyota revealed the third-generation of the Century in 2018. Pivoting towards ultra-exclusivity, Toyota now limits production to 50 cars a year, as the Century is nearly a "hand-built" vehicle.

Receiving its visual cues from the Century Royal, a one-off version of the luxury sedan, built at the request of the Japanese Imperial Household Agency, the latest Century retains the DNA of its predecessors. However, incorporation of carefully selected technological upgrades allow the driver and passengers to enjoy a 21st century car, that represents old money.

The biggest indication of the level of modern upgrade on the current Century generation is the car's hybrid-functionality. Toyota's all-new 2UR-FSE is a 5.0-liter V8, and it maintains the same displacement as the outgoing V12. However, it now boasts an added electric drive system to improve fuel economy and meet increasingly strict emission regulations. Also, another pointer to the improvement of the car is the suspension upgrade from double wishbone, to state-of-the-art multi-link suspension that features airbags, further enhancing the cloud-like ride quality.

Although the Century has always had a massive price tag, don't make the mistake of dubbing it a sign of wealth. Unlike Maybach or Rolls-Royce, Toyota states explicitly that "the Century is acquired through persistent work, the kind that is done in a plain, but formal suit." A statement to which begs the question, where's the nearest suit store?

Here’s What Made The Cadillac Eldorado Biarritz An Automotive Icon

A Detailed Look At The Toyota Rhombus Concept

Harley-Davidson Fat Bob Vs Fat Boy: These Are The Main Differences

Why The New 2023 Acura Integra Doesn’t Exceed Our Expectations